We’ve been running biodiesel in our cars and trucks here at TBI for several years. One of our employees, finally sold his pickup truck and got a much more fuel efficient VW Jetta TDI to run biodiesel in it.

Following the same rules we tell all our new customers, he ran the first few tankloads of fuel as a lower biodiesel blend, B20, so it would not clog up his fuel filter and leave him stranded as the biodiesel began to clean out his fuel system and engine. After running about 3,000 miles on B20 and B50 blends, he changed his fuel filter and brought it in to show us here at TBI. 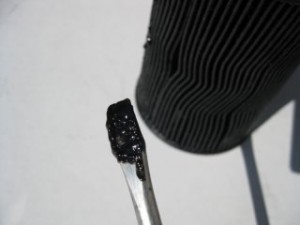 Fuel filter and sludge after biodiesel clean out

In the first photo  you can see the fuel filter and the sludge on the screwdriver that shows the gunk that came out of the fuel system.  This is diesel fuel residue and tars that accumulate over time when using petroleum diesel.  Because biodiesel is slightly solvent, it breaks down these residues and flushes them out of the fuel system.  This is a good thing, unless it happens all at once.  That’s why we recommend using a low blend such as B20 to start off with when switching a used engine on biodiesel for the first time  (new engines won’t have this problem because they haven’t run hours and hours on diesel fuel).

I broke my own rule once and started a 20 year old truck with straight B100 after many years of using petroleum diesel fuel.  I got about 1000 yards before the fuel filter clogged up completely and the truck rolled to a stop.  It took me 4 more fuel filter changes before I got the truck running again.   Don’t do this… 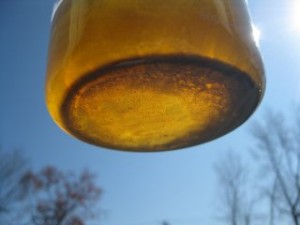 Fuel from the “dirty” side of the fuel filter

The next photo shows the fuel that was pulled from the dirty side of the fuel filter and the soot that remains in the fuel.  There is still a good amount of particulate matter to be pulled from the fuel system.  Again, using lower blends makes this happen over a longer time period, and helps prevent you from being stranded on the side of the road with a stalled vehicle.

An alternative solution, albeit untested, would be to unhook your fuel line going into your engine and run straight B100 until the fuel line pumped clear fuel.  This sounds okay in theory, but nobody here has ever tested it.  In some of the VW’s with tank mounted fuel pumps, this still could cause a problem, or even a pump failure.   We like the safe and slow method, as we have done here with our other cars and trucks.

As of this date, we have three VW TDI’s running biodiesel at either B50 or B80 blends, or straight B100 blends.  Two of these vehicles have been running B100 for over 100,000 miles with no fuel related breakdowns.   This, from a engine platform that VW says is only rated for B5.    Seems like they could bump up that rating a little bit to me…