I spent the entire day this past Thursday in Washington D.C. lobbying my congressmen to bring their attention to matters relating to the biodiesel industry.  Specifically, the biodiesel tax credit and the EPA RFS mandate limits for 2013, which is currently in jeopardy of being left at the current 1 billion gallon limit set for 2012.  The problem is that we already hit the 1 billion gallon mark (and then some), and leaving it at that same level for 3 years in a row guarantees a stagnant industry that will not grow if there is not additional demand to create the incentive to increase production.

This was my first time walking around the halls of the House of Representatives and the Senators.  It was pretty interesting, really.  What amazed me was how easy it was to just drop in (if you didn’t have an appointment, which is preferred obviously) on your congressman and most likely at least be able to meet briefly with an aide.   What amazed me further was that even after 8 years in existence, the biodiesel tax credit is still largely a mystery to many congressmen.

The biodiesel industry is still fairly young, and needs the support of the tax credit to be able to compete with the heavily subsidized petroleum industry.  The tax credit for 2012 would be fairly sizable, about 1 billion dollars.  However, the petroleum industry gets tax credits for refining roughly 60 billion gallons of diesel fuel in the US.  So our portion of this offset is fairly small at this point.

That said, every gallon of biodiesel produced in this country means domestic jobs, domestic economics, and domestic fuel that is produced here rather than in a foreign country in the middle east where many do not like Americans.  To me, that’s three very good reasons to support biodiesel with a tax credit.  Want to see what happens with and without the tax credit? 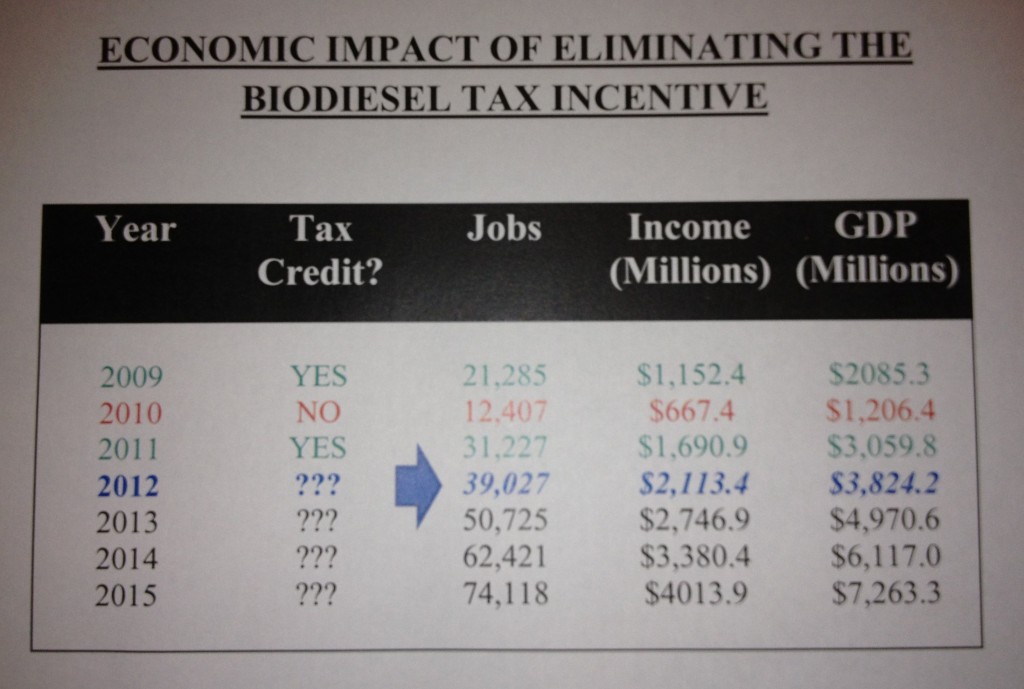