I don’t know about you, but I am getting really tired of hearing about whether global warming is real or not.  Some scientist have “absolute proof” that it is real and is going to kill our planet, others have “undeniable proof” that it is a hoax.

To me, unless you’ve actually been to the South Pole and taken ice core samples to examine air bubbles for CO2 and O2 level trends, I don’t think you have a clue what you’re talking about.  Even then, what does that really show?  How can we possibly take into account all the geological, astronomical, and biological impacts that have occurred over eons of time and make a definitive statement that we know for sure there is or is not any anthropomorphic harm being done to the atmosphere?

In relative terms, we as humans have only been this planet a relatively short time, and the industrial period is just a blink in the geologic time span of the earth.  To presume that we can affirmatively say whether or not we’re actually harming it by burning fossil fuels, wood, or elephant turds is a bit presumptuous to me.   What’s to say that we’re not seeing a climatic change that’s part of a repeatable pattern that’s been happening over millenia?

So what can we measure?  We can see and measure a difference in air pollution, or smog.  Anybody who’s been to Los Angeles or a similar city can see the effect that air pollution has.  Making changes to fuel burning technologies or even changing fuels (to things like biodiesel, for instance…) can make significant reductions in smog that can dramatically benefit the local environment in a fairly short period of time.  These kinds of changes make sense to me. 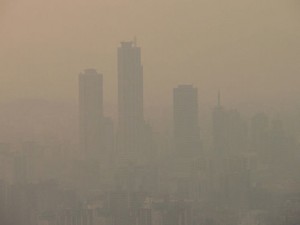 Still, as I’ve said before, the whole debate about global warming seems a bit off center to me.  People treat it as if it’s a religion, and you have to be on one side or the other.  Pascal, the famous French mathematician, made a wager relating to religion that a rational person should wager as though God exists, because living life accordingly has everything to gain, and nothing to lose.  We see it similarly with global warming.   If we behave as if global warming is real (and act rationally and prudently about how to mitigate it), the benefits greatly outweigh the risks.

The risks are that we are foolish.  We expend resources and money on an issue that doesn’t matter, harm businesses with onerous and irrational regulatory burdens, and put 1st world countries at a disadvantage to developing countries that do not honor these policies.  Indeed.  These are foolish.  There needs to be some limits and parameters applied to how to mitigate global warming, if it exists at all.

The benefits are many.  We create jobs and new economies for the renewable fuel, conservation, and sustainability markets (more on that overused word “sustainable” later), we create new technologies and tools to better utilize available resources, we learn how to optimize local economies and make global transportation and logistics more efficient,  we reduce smog and harmful pollutants that kill humans, animals, and vegetation, and we reserve strategic petroleum resources for use as building blocks for complex chemical products such as plastics, medicines, and lubricants (rather than simply burning it like a moron).

The fact is petroleum is here to stay.  It’s not going away.  We NEED it.  We just shouldn’t be burning it haphazardly without any sort of plan on what to do when it goes it away.  And it will go away, at some point in the future (some say sooner than later, but that’s another debate).  It takes too long for nature to make it, and we’re going through it way too fast by burning it.   Using it as a feedstock for more beneficial component and chemical products makes much more sense for a strategic resource that is this hard to replace.

This is where the “sustainable” idea comes in.  I hate that word.  It’s been overused almost as much as “green” and “socially responsible”, but the fact is, it’s a damn good word to describe the concept.   We as humans are crowding the planet, and consuming resources at a rate that’s never been seen before on this planet (I think, anyway…  Maybe the dinosaurs ate themselves to extinction?).  Finding resources that we can grow over and over again each year, or on a continual basis, allows us as humans to continue to consume at the rate we are and not run out of natural resources.  We’re not there yet.  But we’re making more advances in this field than ever before, and partly because of the scary concepts of things like global warming.

The trick, as always, is to find a way to make these advances with the minimum cost and impact on society.  Right now, we’re caught up in the technicalities of the argument, and missing the bigger picture, in my opinion.